Like a breath of fresh air or an oasis in a desert, Raissa Katona Bennett breezed through The Original Room at Don’t Tell Mama, her unmic’d voice filling the space with a bright, powerful soprano, and her warm gracefulness casting a spell over an audience deliriously happy to welcome her back to the stage. Katona Bennett’s show CAN’T HELP SINGING – THE MUSIC OF Jerome Kern is not a new one. Indeed, the show was first created some years ago to great success, then revived last year when a live recording cd was released. As if intuition told her that fans and the cabaret community were missing this perfect evening of music, Raissa Katona Bennett decided to bring the show back for two performances this fall – and the fans turned up to celebrate at the first performance last night.

And celebrate we did.

Throughout the evening could be heard yells of “Bravo!” and “Well done!” and even an occasional “Woo!” and it surprised nobody in the club because Raissa Katona Bennett is always a welcome performer on any stage. With rock of Gibraltar confidence and Park Avenue elegance, Ms. Katona Bennett has only to smile your direction, bat an eyelash at you, and run her pretty soprano up the scale on “The Song Is You” or “You Are Love” and you not only want to yell bravo at her, you need to. When a performer displays this much A-Game, they become invincible, able to seduce even the most cynical and sullen of audience members, Raissa Katona Bennett, looking like a million bucks and sounding like an MGM movie star of the great musicals, is certainly equal to the task. Using an incomparable legit voice on “All the Things You Are” is de rigueur, and that legit soprano comes out many times during Can’t Help Singing, but then Katona Bennett hits you with a Broadway belt that takes you by surprise, applying the songs to stories about her life, like using “Queenie’s Lament” and “Life Upon The Wicked Stage” as a mash-up with which to describe the life of an actress.

These stories that RKB shares during the expertly crafted hour of entertainment are wonderfully executed. Written in a manner that allows for dialogue about every third song, the anecdotes about Kern’s life and Raissa’s own life are just the right length, steering clear of ever becoming either voluble or boring, and always delivered to perfection by an artist who obviously knows when to speak and when to sing. The economy of words used in the text allows Ms. Katona Bennett to share with her audience in ways casual and competent before wowing them with her voice, blissful and beautiful. That brevity of rhetoric serves to do that which has become increasingly impossible in cabaret shows of the day and age: it brings Can’t Help Singing in at exactly an hour, this writer’s favorite length for a cabaret show. Let’s face it, many nightclubs have seating that can be cramped, and patrons of a certain age, and sitting in the same attitude for 90 minutes can be difficult for many people. It is a greatly considerate act of Raissa Katona Bennett to bring so well constructed and spectacularly executed a show to the New York cabaret stage and to do so in sixty minutes. This writer applauds RKB for this consideration and every other factor of the sublimely impeccable show.

Every nightclub singer has supporters, and while musical director/pianist Mark Berman and bassist Tom Hubbardprovide musical backup par excellence, Katona Bennett’s best collaborator of the evening is Kern himself because RKB and Kern are perfectly suited for each others’ gifts – this soprano ideally interprets each of his songs as though she were there, acting as muse, when the songs were first created. Sadly for Ms. Katona Bennett, at last night’s performance she also had some people working against her in the form of audience members who seemed to have forgotten that, while there is an exchange of energy between performer and audience, cabaret is not a team sport and that having full-voice conversations throughout the entire program, that singing along with your best audition volume, is more than unacceptable, it is rude. Of course, this is something one encounters at every show (trust me because I am actually AT every show), but it was particularly bad last night at Don’t Tell Mama; nevertheless, Raissa Katona Bennett took it in stride, forged on, and let her performance suffer not one bit. Thank heaven for professionals.

Scoring especially high on the satisfaction scale in the show were a lush, emotional “Remind Me,” a suggestive, swingy “Let’s Begin,” and a buoyant “Hey Fella,” the lead-in to which was the delightfully personal story of Katona Bennett’s courtship and marriage to her husband of 22 years (24 total, 22 wed) – but these three numbers simply speak to this writer, the fact of the matter is that, throughout the entire evening, Raissa Katona Bennett could put not one foot wrong. She was the ultimate high point of the night – even if she had sung not one note, it would have been a pleasure to simply sit and listen to her tell stories, so engaging and charismatic is she. Can’t Help Singing is simply a superb and melodic reason to spend an hour with Raissa. Hers is a show that fledgling cabaret singers (and veteran performers needing a refresher course) should check out to see how consummately and bewitchingly it can be done. 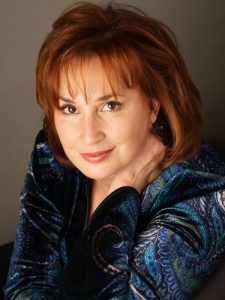