We’ve been involved with Shih Tzu Fur Baby Rescue for a little over 3 years, and active in dog rescue since 2001 when we adopted our first fur daughter, Brandy Alexandra Bennett, from Toy Fox Terrier Rescue.  Yesterday was the 3 year anniversary of her transition, so I write this in her honor.  Not a day goes by that I don’t miss her and bless her, because she is the one who got us on this band wagon.  She was 7 when we adopted her and ever since, I’ve had a particular passion for helping to adopt out “senior” dogs or middle aged ones.  All of mine are.

We’d had Brandy 1 month when we were approached to help temporarily foster a 15 year old long haired chihuahua named Goldie.  It’s a long story that I’ll save for a later blog. But suffice it to say, Goldie stayed with us and had the happiest last 11 months of her life and SHE’S the one who got me into Animal Communication and for that, I had to learn to meditate.  All the gifts our babies give us, right? We then fostered for the ASPCA of NYC for a bit and I volunteered there as an adoptions councillor, assistant to the behaviorist in dog training and I started initially volunteering there by walking the dogs.

We lived in Birmingham, AL for a year while my husband was doing a fellowship, and while there, we fostered for the Humane Society and I learned to be a dog trainer and worked at the Birmingham Dog Training Center teaching puppy classes, but the focus of our fostering, was working with dogs with behavioral “issues”, though I’m by no means an expert – somehow, it comes somewhat naturally along with lots of reading and hands on.  We fostered a chihuahua for 4 months who was a bit of a “devil dog” when we got him.  The humane society will foster your dog for you for a bit if you have and emergency.  Otie’s human Mom had to have brain surgery, so we had him for that time.  1.5 years after he went back to her, the Humane Society called us to take him again – for good – we were back in NYC, but happened to be going down for a visit, so we said we’d take him back and then get him ready for adoption, because at 15, Brandy had told us she was done with helping to foster new dogs. However, we got Otie home to NYC and within a day, Brandy told us to keep him.  Again, I’ll write more about that on another blog.

As Brandy neared 17, we knew she was getting ready to leave us, but she didn’t want to go until Otie had another buddy.  That’s when I started searching Petfinder for a “10 lb or under Toy Fox Terrier  or any mix or breed, not fluffy) and up popped a picture of “Princess” from STFBR.  She was exactly what we were looking for – 5 “ish”, being fostered in Brooklyn and she looked EXACTLY like Brandy (see below).  That was just the icing on the cake.  We filled out foster paperwork, because we had to be sure she and Otie would play together – no problem.  We adopted her officially a month later and she chose the name Phoebe, in honor of her foster mother, Phoebe Kincaid!

Brandy transitioned 3 months later, and we were all very sad, but Phoebe helped Otie through it and they became the best of friends.  Phoebe took over his barking at everything near the door duties, and began to vocalize with me when I sing high.  (There’s a youtube video of it on my channel, called “Phoebe sings”).

We started helping STFBR with transports and then I called Meredith about a year later and told her we were ready to foster again – our timing was perfect, because she had a transport coming up and what did I think about fostering a 9 to 11 year old female Havanese?  Well!  Otie’s favorite breed and his first girlfriend in NYC was a Havanese, so we said yes!  We had her a week later and she is our official first foster failure – Miss Molly had been a Bennett dog for 1.5 years now and she and Otie are inseparable and the 3 of them together are a blast, but a handful – literally. So now we have 7 year old Phoebe, 11.5 year old’s Otie and the fluffy one, after all, Molly.

Three months after getting Molly, I drove Terese Genecco and Shaynee Rainbolt out to Brooklyn to pick up CeeCee for them to foster temporarily in an emergency.  She is now my favorite fluffy niece and official furbaby of the ladies – CeeCee gets to visit with the Bennett pack often, and they have a blast.

So that’s our story – having 3 makes it harder to foster in NYC, but I do home visits, transports, process apps write my blog on dog rescue, work on fundraising and we can do short term emergency fosters.

If you want to get involved, check out Shih Tzu Fur Baby Rescue. 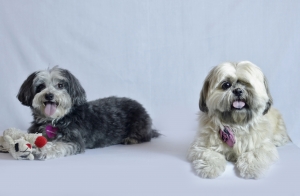